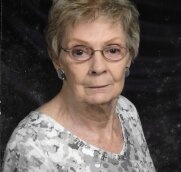 Anita Lewis Young (also known as "Nita" or "Nanny") of Eclectic, Alabama, 79, ended her battle with Alzheimer's and headed for the pearly gates of Heaven on March 4, 2021.

Anita was born on April 10, 1941. She graduated from Elmore County High School in 1959 and married her high school sweetheart, Richard, shortly after they graduated. They celebrated the births of their three sons in 1960 (Ricky), 1967 (Wade), and 1976 (Michael). Anita loved her small town of Eclectic and spent most of her life living there happily while raising her family.

Anita was a member and long-time employee of the First Baptist Church of Eclectic. She loved spending time with her church family and helping with special events at the church. Anita was also an avid supporter of Elmore County High School athletics. She helped with football suppers for several years and enjoyed cheering for the Panthers on Friday nights.

Some of Anita's other interests included Auburn football, reading novels, completing crossword puzzles, and shopping for all of the pretty clothes and jewelry that she liked to wear. Most of all, Anita enjoyed being a loving and devoted wife, mother, grandmother, and friend. She could always be counted on for a hug and a good laugh.

All are welcome to attend and celebrate Anita's life at 11:00 am on Monday, March 8, 2021. Her funeral will consist of a graveside service at Pleasant Grove Cemetery in Eclectic, AL with Pastor Britt Green of FBC-Eclectic and Linville Memorial Funeral Home presiding.