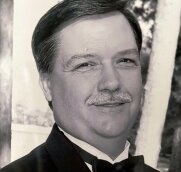 Blake Thomas Greenwood, 62, of Tallassee, Alabama, passed away May 18, 2022 at his home in the presence of his family.

A memorial service will be held Monday, May 23, 2022 at 2 pm in the Chapel of Linville Memorial Funeral Home & Crematory. Brother Josh Cullars will be officiating.

Blake was born March 8, 1960 in Pittsburg, Kansas, to James Allen Greenwood, Sr. and Judith Rae (Blackman) Lindsey. He had over 18 years of service as Parts Manager for both Ben Atkinson and Long Lewis Ford dealerships. Blake enjoyed hunting and fishing.

Blake was a loving husband, father, grandfather, brother, and son. He will be dearly missed by his family and friends.