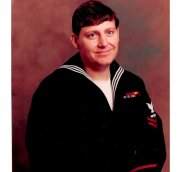 Byron served as a Deacon at Lake Martin Baptist Church. His passion was building props for the children in Vacation Bible School. His greatest joy was night fishing, laughing with friends, playing with his dog, watching his favorite TV shows and being with family.

Visitation will begin at 11 AM with funeral service to follow at 12 noon on Friday, August 20, 2021 at Beulah Baptist Church, Dadeville. Rev. Terry Herron and Rev. Jimmy Allen will be officiating. Burial will follow in adjoining church cemetery with military honors, Linville Memorial Funeral Home and Crematory directing.

To order memorial trees or send flowers to the family in memory of Byron Eugene Stockdale Jr., please visit our flower store.