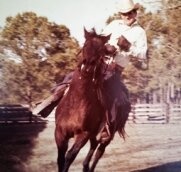 Charles Loyce Rowe, son of James and Lela Rowe, brother, uncle, friend, husband and father, was a cowboy. He was our trail boss, with his white shirts, dark jeans (never faded), close cropped hair, aftershave, boots and a hat. He loved his horses and he loved his cows. He was a nurturer. He was crafty and amazingly talented with his hands. He basically ran a large ranch with several hundred head of cattle on his own - with some help of arguable value from his kids. He took pride in his work and he believed in building things that would last. He kept his fence rows clean and he kept his pastures bush-hogged. We’ve seen him work half a day on something then tear it down and start over and refused to be paid for it because it wasn’t the best he thought it could be. He loved the land and he was a hard worker his whole life. He was a veteran, having served in the Army National Guard as an aircraft mechanic. Our forever image of him will always be what we know he’s doing now - one tough cowboy on the back of a fine horse, reins held firmly in strong hands, standing up and leaning forward in his brand-squeakin’-new Billy Cook saddle at a full canter across the pasture, calling to the cattle and urging them towards the barn.

To order memorial trees or send flowers to the family in memory of Charles Loyce Rowe, please visit our flower store.