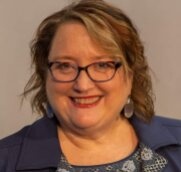 Donna Marie Davis Russell, 54, of Virginia Beach, Virginia, a faithful servant of the Gospel, entered her heavenly home to be with her Lord and Savior Jesus Christ on January 11, 2022. Born on August 13, 1967 in Alexander City, referred to affectionately by locals as “Alex City,” she completed her secondary education graduating from Pell City High School in 1985 and earned two Bachelor’s of Arts degrees in Broadcast Journalism and Public Relations from Troy State University in 1990. She also completed an internship in Washington, D.C. her senior year. Her college years provided a sketch of where her personal and professional journeys would ultimately lead, blending two of her biggest loves: journalism and ministry. While at Troy State, Donna served on several mission trips as a member of Campus Outreach, including a summer work trip to Thailand. She also shared the plan of salvation and discipled many students, including Tabby Case who was one of her closet friends throughout college until Donna’s untimely death.

Her first job was in broadcasting as an anchor for a local news station in Troy, AL. After graduation, Donna’s career included posts in Alabama and Tennessee, starting in Montgomery, AL where she worked as a news producer for WSFA (NBC), Alabama Shakespeare Festival, Save a Life, and WNCF (ABC). While in Montgomery, she reconnected with Charles Russell, a friend from college. The two married on June 29, 2002. In 2003, they moved to Birmingham, where Donna worked for Channel 21, the WB affiliate. In April 2006, Donna and Charles relocated to Chesapeake, VA for an opportunity that allowed Donna to incorporate her talent, training, and professional experience with her passion for ministry. In 2007, they moved to Virginia Beach. As Managing Editor for CBNNews.com at the Christian Broadcasting Network (CBN), her newsroom experience helped to take the team to new heights, an endeavor to which she dedicated herself for the last 15 years. According to Rob Allman, Vice President of CBN News, “Donna was one of the first major hires and it was clear that God had chosen Donna for CBN.” As she noted in her application, she and Charles were members of the 700 Club, writing of CBN: “It is an organization that we identify with because of our faith in the Lord Jesus Christ. We also believe in the Great Commission and bringing the good news to people here at home and around the world. . . There is nothing more important than impacting the lives of others with the love of Christ wherever we are and in whatever we do.” In 2009, as an Executive Producer, she led a new effort that ultimately would become the CBN News Channel. Beyond being an integral part of the ministry of CBN, she also was a bright light and a beloved sister in Christ who was always willing to stop whatever she was doing to pray for her coworkers.

Donna’s ability to see beauty in others fueled her love for Mary Kay Cosmetics and jewelry. Demonstrating an entrepreneurial streak and business savvy, she worked as a Mary Kay consultant starting in 1992 eventually obtaining Directorship status, which earned her a free Chevy Malibu. Only the top 2% of all Mary Kay has ever reached that honor. Respected and adored by both her fellow consultants and customers, in 2016 she also was selected to receive one of the most prestigious awards Mary Kay offers: the “Go Give Award,” based on a vote from all of her Mary Kay peers given to someone who shows true generosity, kindness, helpfulness, and a willingness to go above and beyond.

To adequately give Donna her just due would be an undertaking much too long. To know Donna was to love her. Whether it was a stranger meeting her for the first time or someone whose friendship followed the arc of her life back to Alabama, everyone would agree she was the kindest, most generous, loving, family-oriented person you could ever meet. She genuinely loved Jesus and wanted others to have a relationship with Him. A prayer warrior, Donna exuded Jesus’s love for others offering a tangible expression of the Lord’s hands, feet, and voice to many. Notably, Donna had the gift of encouragement along with the ability to make everyone she met feel like she or he was the important person in the room. She never met a stranger, making friends everywhere she went while also intentionally building, growing, and maintaining relationships with people from all backgrounds. She knew people in high places and low places and loved them all the same.

Finally, the family would like to thank “Team Donna,” who remained in constant contact keeping everyone informed throughout her hospital stays and praying daily, individually or together on Zoom. A special thanks to the “Virginia Team Donna” — many friends who have become family to Charles and Donna over the years and, in particular, made sure to rally support around Charles at home or at the hospital. Whenever visiting hours permitted, the Virginia Team was with Donna ministering, singing to her, playing worship music, and praying over her. What an expression of the Body of Christ and His love for Donna and us all! Thank you to every one of the prayer warriors who prayed. You know who you are!

Beyond any doubt or reservation, we believe Donna Marie Davis Russell was received into her Savior’s loving arms on Jan. 11th. Her favorite scripture for the last few months was Roman’s 8:11: “But if the Spirit of Him who raised Jesus from the dead dwells in you, He who raised Christ from the dead will also give life to your mortal bodies through His Spirit who dwells in you.” We praise God for the gift of eternal life through Jesus Christ our Lord!

In lieu of flowers, the family asks for donations to be made to the GoFundMe memorial to help take care of medical expenses. The link is entitled: Donna Davis Russell - Memorial Fundraiser, organized by Charles Bryant Russell

Privacy Disclaimer
The information contained in this Book of Memories is intended solely for the private use of the families and friends of the deceased to support each other and honor, respect and pay tribute to the memory of the deceased. Any and all other use is strictly prohibited unless consent is provided in writing by the funeral home. Without limiting the foregoing, any reproduction, distribution of the information contained herein, nor any contact or solicitation of any person identified in this work, nor any attempt to use the information in the work is prohibited

To order memorial trees or send flowers to the family in memory of Donna Russell, please visit our flower store.