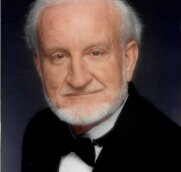 After graduating from Sikeston High School in Sikeston, MO, Frank enlisted in the United States Air Force at the age of 19. He served in both the Korean and Vietnam Wars as an Air Rescue Medic in the 9th Aeromed Evac Squadron. He logged countless flight hours and numerous missions during his enlistment until he retired after 27 years 9 months of service as a Chief Master Sergeant in 1980. He earned various medals & accolades including the Air Medal with 4 Bronze Service Stars, AF Commendation Medal with 1 oak leaf cluster, Korean Service Medal with 1 Bronze Service Star, United Nations Service Medal, Republic of Vietnam Gallantry Cross with Device, AF Presidential Unit Citation, AF Outstanding Unit Award with 2 oak leaf clusters and the AF Longevity Service Award with 5 oak leaf clusters. Frank was also a graduate from both the USAF Senior NCO Academy & the Military Airlift Command NCO Academy. One of Frank’s most famous stories to recount was a medical rescue mission that involved retrieving a fellow soldier amid shark invested waters off the coast of Asia. The rescued soldier later went on to write a memoir and included the story in his book. After retirement, Frank & his wife Grace were both very active members of the local Air Force Sergeants Association chapter in Montgomery, AL where Frank held numerous positions and titles.

Anyone who knew Frank, knew that he was passionate about two things: his military service and his family; his wife Grace who proceeded him in death on May 1, 2020. He and Grace met and married on December 17, 1953.They had to cross state lines into Arkansas for the ceremony because Grace was only 17 at the time. Together over their 67 years of marriage they shared 7 children, lived in multiple states & countries, traveled extensively over the continental United States and loved their little lap dogs. Their love for one another was apparent to everyone they encountered. Frank’s only wish in later life was to take care of Grace and out-live her by 1 day, to which he did proudly.

Frank was a devoted husband, father, and Papaw. His grandchildren and great grandchildren were one of his life’s greatest joys. If you were lucky enough to be one of them, you know that tugging on his white beard and a mention of the “two-fisted” stick are engrained in your memory. A trip to their home on the hill meant you would be spreading corn on the back 40 each evening to feed the deer and turkeys, sitting on the backyard swing for a picture, getting a tour of his latest outdoor project on the back of his 4-wheeler, enjoying something Papaw cooked on the grill for dinner and sleeping more soundly (despite the chiming of the living room clock) than you had in ages.

Frank was preceded in death by both parents, all 5 of his siblings (Joseph, Richard, Violet, Martha Jo and an infant bother), his beloved wife Grace and 2 great grandsons (Mason Tucker and Evan Jump).

There will be a gathering of family and friends to honor Frank’s life on Friday, December 3, 2021, at 10 am at Linville Memorial Funeral Home Eclectic, AL with Father Mateusz (Mat) Rudzik officiating. For those unable to attend, the service will be live on Facebook. Burial will follow immediately after at Fort Mitchell National Cemetery, Fort Mitchell, AL at 2 pm EST. Arrangements by Linville Memorial Funeral Home.

The family wishes to thank Ms. Wanda Sealy, caretaker, for her devotion and compassionate care. Words are not enough to express the family’s heartfelt appreciation to Carol Tucker who has not only been a devoted daughter-in-law but has also been by Frank’s side over the past 3 years, caring day-in and day-out for him as his personal home health nurse. We all say, “thank you, thank you, thank you”!

Honorary pallbearer will be Frank’s grandson Lt. Colonel William “Billy” Tucker who he, not-so-secretly, loved more than any other.

To order memorial trees or send flowers to the family in memory of Francis Eugene "Frank" Tucker, please visit our flower store.

Graveside service and burial at Fort Mitchell will be at 2 pm EST, Friday, December 3, 2021.