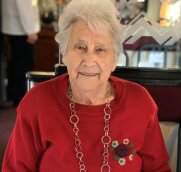 A private family memorial service will be held at a later date.

If desired, memorial contributions may be made in her memory to: New Home Baptist Church Missions Fund, 5130 Elmore Rd. Wetumpka AL. 36092.

To order memorial trees or send flowers to the family in memory of Gaynelle "Pat" Guy, please visit our flower store.