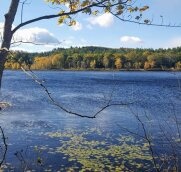 He is preceded in death by his parents Bobby and Delphine Davidson and his grandson Trenton.

Jan loved his family, singing, playing music, entertaining, fishing on the Tallapoosa River, hunting, and riding his motorcycle. He retired from Auburn University after a long career as an electrician. If anyone knew him, they would know he considered other people's garbage to be his hidden treasure. He could fix anything. He will be greatly missed.

Visitation will begin at 1:30 pm and the memorial service will begin at 2:00 pm on Sunday, February 28, 2021 at East Tallassee United Methodist Church.

Online condolences may be posted at www.linvillememorial.com

To order memorial trees or send flowers to the family in memory of Gery Jan Davidson, please visit our flower store.