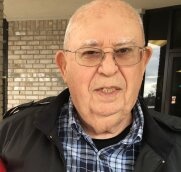 On Thursday , November 28, 2019, James Carl Ballard, loving husband, father, grandfather, and great grandfather passed away at the age of 83. Carl was born on January 3, 1936 in Tallassee, AL to Leora Ethleen Jarman Ballard and Arthur Ballard.

On December 24, 1955, he married Mary Blackmon. They raised one daughter, Carla, and one "adopted" daughter Jessica Thornton. He retired from the State Revenue Department, Income Tax Audit Section after 34 years. Carl became a Christian as a young man and committed his life to serving the Lord. His overwhelming love for his family was only superseded by his love for the Lord. He enjoyed spending time with his family, working in the yard, and Alabama football. Sunday dinner was his specialty, and although there might only be a few of us there, he always cooked enough for an army! While these were things he loved, his main goal was for his family to love and serve the Lord as he did, and eventually make Heaven their home.

Carl was preceded in death by his father, Arthur Ballard, and his mother, Leora Ethleen Jarman Ballard, and his sisters Wilda Jean Thornell and Wilma Dean Ballard. He is survived by his wife of almost 64 years, Mary Blackmon Ballard, his daughter Carla and son-in-law Barry Brewer, his two grandchildren and their spouses Deanna and Christopher Acreman, and Vance and Miranda Brewer, his six great-grandchildren Autumn, Tyler, and Chloe Acreman, Joash, Katie Grace, and Oliver Brewer, his brother Arthur Donald Ballard, as well as numerous nephews and nieces.

Visitation will begin at 10:00 am, Monday, December 2, 2019, with funeral service to follow at 11:00 am at Linville Memorial Funeral Home with Rev. Bill Perryman officiating and Josh Dixon assisting. Carl will be laid to rest at Rose Hill Cemetery, following the service. Family will gather at Mary’s home after the graveside service.

To order memorial trees or send flowers to the family in memory of James Carl Ballard, please visit our flower store.