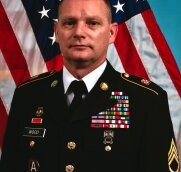 Master Sergeant James Paul Wood of Eclectic, AL died unexpectedly on the morning of Friday, July 17, 2020 at the age of 52.

James was born to Billy and Marion Wood of Holtville, AL and has been a resident of Eclectic for more than 27 years. James, a 1986 graduate of Holtville High School, enlisted into the Alabama Army National Guard in 1987 before serving his country for more than 32 years and was still serving on active duty at the time of his death. James had served as a Deacon at First Baptist Church of Eclectic and Good Hope Baptist Church. James led an exemplary life of service to his community and his nation, leaving behind many that consider him to be a mentor and a friend.

A funeral service will be held at Good Hope Baptist Church in Eclectic, AL on Friday, July 24, 2020 at 2:00 pm, with Reverend Jason Tew presiding. There will be a visitation period beginning at noon. A graveside service with military honors will follow at Pine View Memorial Gardens in Wetumpka, AL, Linville Memorial Funeral Home & Crematory directing. Soldiers of the Alabama National Guard will serve as pallbearers. Honorary pallbearers will be Tim Brown, Glen Connell, David Sides, Jeremy Wood, Jonathon Wood, and Byron Wynn.

In lieu of flowers, the family asks that monetary donations be directed to the Chris Kyle Frog Foundation or a Veteran Support Organization of your choice.

To order memorial trees or send flowers to the family in memory of James Paul Wood, please visit our flower store.