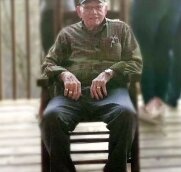 Jerry Frank Thompson, age 82, passed away unexpectedly yet peacefully in his home on Saturday, September 18, 2021. Mr. Thompson was born May 30,1939 in Alex City, AL. He was a former mayor of Eclectic, AL, Charter Boat Captain for more than 20 years in Destin, FL and Past Master Pinick #161 Grand Lodge of Alabama.

Left to cherish his memory are his three children, Frankie of Knoxville, TN, Edward (Twinkx) of Youngstown, FL and Sherry of Schertz, TX; and brother Melvin of Tallassee, AL.

To order memorial trees or send flowers to the family in memory of Jerry Frank Thompson, please visit our flower store.