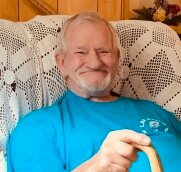 Funeral service will be Monday, March 1, 2021 at 11 A.M. at Prospect Baptist Church with Rev. Ronnie Knight and Rev. David Jones officiating. Pallbearers will be Charles Chambers, Pat Glover, Steve Maynard, Steven Ingram, Alan Nummy, and Wes Talton. Honorary pallbearers will be the Deacons of Prospect Baptist Church and Donnie Pemberton. Burial will follow in Prospect Cemetery, Linville Memorial Funeral Home and Crematory directing. Visitation will be at the church one hour prior to the service.

Jimmy served in the U.S. Army Corps of Engineers. He retired from the State of Alabama as a civil engineer and after retiring served several private companies as well. Jimmy was a deacon with First Baptist Church of Eclectic and Prospect Baptist Church.

He was an avid bass tournament fisherman and loved hunting. His hobbies were Native American History and artifact collecting.

To order memorial trees or send flowers to the family in memory of Jimmy David Ingram, please visit our flower store.