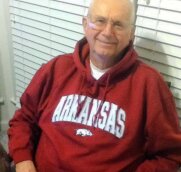 Visitation will begin at 10:00 am with funeral service to follow at 11:00 am at Linville Memorial Funeral Home on Saturday, June 11, 2022 with Rev. Clint McBroom officiating. Burial will follow in Rose Hill Cemetery.

Jon is preceded in death by his wife, Lea, in 2008. He is survived by his three children, Michael Clark (Laura), Sandra Clark and Jodi Caraccio (Larry); brothers, Ken and Larry; sister, Karen; six grandchildren, Jeremy, Jeffrey, Stephen, Wesley, Daniel and Jillian; eight great-granddaughters, Emma, Lea, Cadence, Abbie, Raeleigh, McKinlee, Kennedy and Adeline and his first great-grandson on the way. He also has many family members in Indiana and Pennsylvania.

Jon joined the Air Force in 1954 and proudly served his country for 26 years. He retired as a MSGT in Homestead, FL and moved to Tallassee in 2005.

He will be missed by his children, grandchildren and especially his great grandchildren. The family extends a special thanks to Kindred Hospice for their care given to Jon.

To order memorial trees or send flowers to the family in memory of Jon Paul Clark, please visit our flower store.