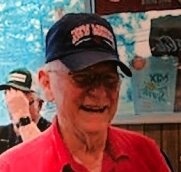 His hobbies included working on cars and motorcycles and he enjoyed sailing.