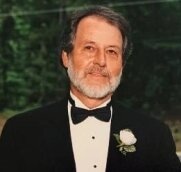 Buddy was born and raised in Friendship, AL. He graduated from Tallassee High School in 1961. He and Betty married in July 1962. They have three children. He lived almost his entire life within the Elmore County area (although he and Betty and the children lived a short time in Dadeville, AL. They have lived in Redhill for the last 39 years.

Buddy has an extended family with many aunts, uncles, and cousins to whom he remained close to throughout his life. He had many friends and never met a stranger. He loved to hunt and fish and he loved to be outdoors. He spent many years operating heavy equipment. This gave him the ability to make a living and “play in the dirt” at the same time. He was always up before the sunrise and out of the house by daylight.

Buddy and Betty have been members of Refuge Baptist Church for the past 39 years. He served as a deacon for many years. He and Betty chaperoned many youth and children events both while their children were involved and continued after the children were grown.