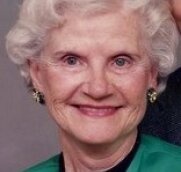 The beautiful, caring, gifted spirit of Mary Glenda O’Neal Burke was relocated to Heaven on August 7, 2019, from her home in Eclectic.

Mary was born in River Falls, Alabama, on March 13, 1918, to Charles and Emma Dunn O’Neal. She enjoyed a wonderful childhood with her family which included her beloved six siblings whom she spoke of often. Her family later moved to Montgomery where she was educated at Sidney Lanier High School. After marriage and living in Decatur, GA, in the ‘40s and ‘50s, Mary and Emory and children moved to their Eclectic home in 1963 where they enjoyed tremendously their Fleahop and Good Hope friends through the years.

Mary was preceded in death by her husband, Emory C. Burke, to whom she was married for 66 years, and two sons, Emory Burke, Jr. and Richard Burke and all her siblings.

In lieu of flowers, please consider a donation to the rebuilding fund of First Presbyterian Church, Wetumpka, Alabama, Mary’s beloved church and choir for 56 years.

To order memorial trees or send flowers to the family in memory of Mary Glenda Burke, please visit our flower store.

Interment will be private family.