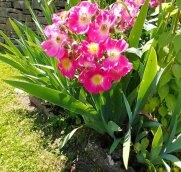 Nan Harper Gray, 67, passed away on Sunday, November 21, 2021. She was born on February 2, 1954 in Georgetown, Massachusetts to parents Earl and Elizabeth Harper.

She is preceded in death by her parents; her son and daughter-in-law, Daniel and Kimmerly Clark Gray; and two brothers, Earl and Glenn Harper.

Nan was a long-time resident of Tallassee, Alabama. She enjoyed reading, watching “her shows” on TV, and wasn’t one to pass up swimming if given the opportunity. But most of all, she enjoyed spending time with the people she loved.

The family would like to express sincere gratitude to Drew King and the entire ER Department as well as the 5th floor nurses at Baptist Medical Center South for the kind, compassionate, and loving care shown to Nan and her family during her final days.

A celebration of life/memorial service will be held at the residence of Gene and Donna Carter, 1975 Taylor Road, Tallassee, Alabama on Sunday, December 5, 2021 at 12:30pm.

Expressions of sympathy may be memorial contributions to one’s favorite charity.

To order memorial trees or send flowers to the family in memory of Nan Harper Gray, please visit our flower store.

Residence of Gene and Donna Carter