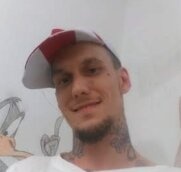 He is preceded in death by his paternal grandparents, Virgil A. and Peggy T. Williams; maternal grandfather, C. Norris Russell and uncle, Ricky Williams.

His hobbies were drawing, sewing, reading, making crafts and anything involving his three sons.

To order memorial trees or send flowers to the family in memory of Robert Edward Williams II, please visit our flower store.