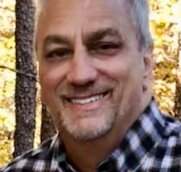 Russell Keith Robinson, 60 of Wetumpka, Alabama, went to be with the Lord on Monday, March 2, 2021. He was born April 27, 1960 in Nacogdoches, Texas. Russell is survived by his sister Rhonda Robinson Jones & her husband Michael; adored nieces Kate Kannady & Amber Jones, and cherished nephew Cullen Kannady. He was preceded in death by his father Keith P. “Pat” Robinson and mother Wanda Summers Robinson.

Russell was a 1978 graduate of Pasadena High School in Pasadena, Texas, and went on to serve proudly in the United States Air Force for 2 years. After returning home, he received his Bachelor of Science degree in Environmental Management from the University of Houston – Clear Lake in 1989.

Russell had a career of over 40 years as an Environmental Professional. Here he addressed a variety of environment issues including environmental compliance, pollution prevention, conservation, and land restoration. Most recently he was working for the State of Alabama, Alabama Army National Guard in Montgomery as an Environmental Manager where he was blessed to work with a team that was like family. Prior roles included jobs with the Florida Army National Guard in St Augustine, and the Oklahoma Army National Guard in Tulsa. A job as a Senior Environmental Advisor with Phillips Petroleum is what led him to Tulsa initially. Russell had a heart for “at-risk” youth and held roles as a Case Manager in the Youth Programs Division of the Oklahoma Military Department, and worked in Corporate Public Relations for YouthReach, Inc. in Tulsa.

Whether Russell knew it or not, he always seemed to find a way to brighten your day, lighten the mood, and draw a smile out of you. Whether it was his quirkiness, striking up a random conversation, or infectious “belly cackle” laugh, you always knew you could count on him to lift your spirits. Russell never met a stranger and was always excited to meet someone new and find a connection with them. Boy could he work a room!

Russell had a servant’s heart and was often doing God’s work here on earth with mission trips, mentoring troubled youth, volunteering, donating, and praying for those in difficult times. He was who you turned to in a time of need, knowing he cared and had your back. Russ was the type of guy that would give you the proverbial “shirt off his back” without question or hesitation. He lived his life ready for Christ, and spent much of his time, money and vacations serving the Lord.

Most importantly, Russell showed up. One of his greatest gifts was being there to support those he loved. He always made the time to make it to a game, (or watch it online if he couldn’t get there in person), birthday party, recital or get together. He loved spending time with family, extended family, and friends who were like family. He cherished fellowship and time together and made it a priority in his life.

To order memorial trees or send flowers to the family in memory of Russell Keith Robinson, please visit our flower store.