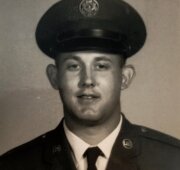 William Charles “Sonny” Kitchens Jr., 69, of Lanett, Alabama, passed away peacefully in the presence of his family, Monday, December 27, 2021. He was born August 12, 1952 in Fort Benning, Georgia, to the late William Charles and JoAnn (McClenny) Kitchens. Sonny was raised in Lanett where he graduated from Lanett High School, Class of “70”.

After high school he attended Troy State University, then enlisted in the United States Air Force during the Vietnam era. Sonny completed not only his degree from Troy State but attained two Master’s Degrees while in the Air Force. During his service he was promoted to the rank of Staff Sergeant and received numerous certificates and commendations. Once his term of service ended, Sonny spent the majority of his career as Director of Human Resources for numerous manufacturing facilities throughout the states of Alabama, Georgia, North Carolina and South Carolina, ultimately retiring to his home state of Alabama.

Sonny also was preceded in death by his grandparents, Curtis and Mary Kitchens; aunts and uncles, Forrest and Burnese Wyatt, Ralph and Feilon Thomas and Grady and Carolyn Johnson.

He shared a lifetime love of aviation with his father who would take him flying in his Piper Cub plane, and building model airplanes together. He also had a strong passion for history having taught it with a special interest in military history. But above all, he had a never ending enthusiasm for Alabama Crimson Tide football. ROLL TIDE!!!!!

Memorial service will be held Friday, December 31, 2021 at 11:00AM EST at First Baptist Church West Point, Georgia, with Dr. Thomas Tucker officiating. Private graveside services to follow in Oakwood Cemetery Lanett. The family will receive friends at the church from 10:00AM EST until service time.

To order memorial trees or send flowers to the family in memory of William Charles "Sonny" Kitchens Jr., please visit our flower store.